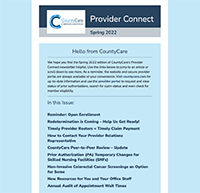 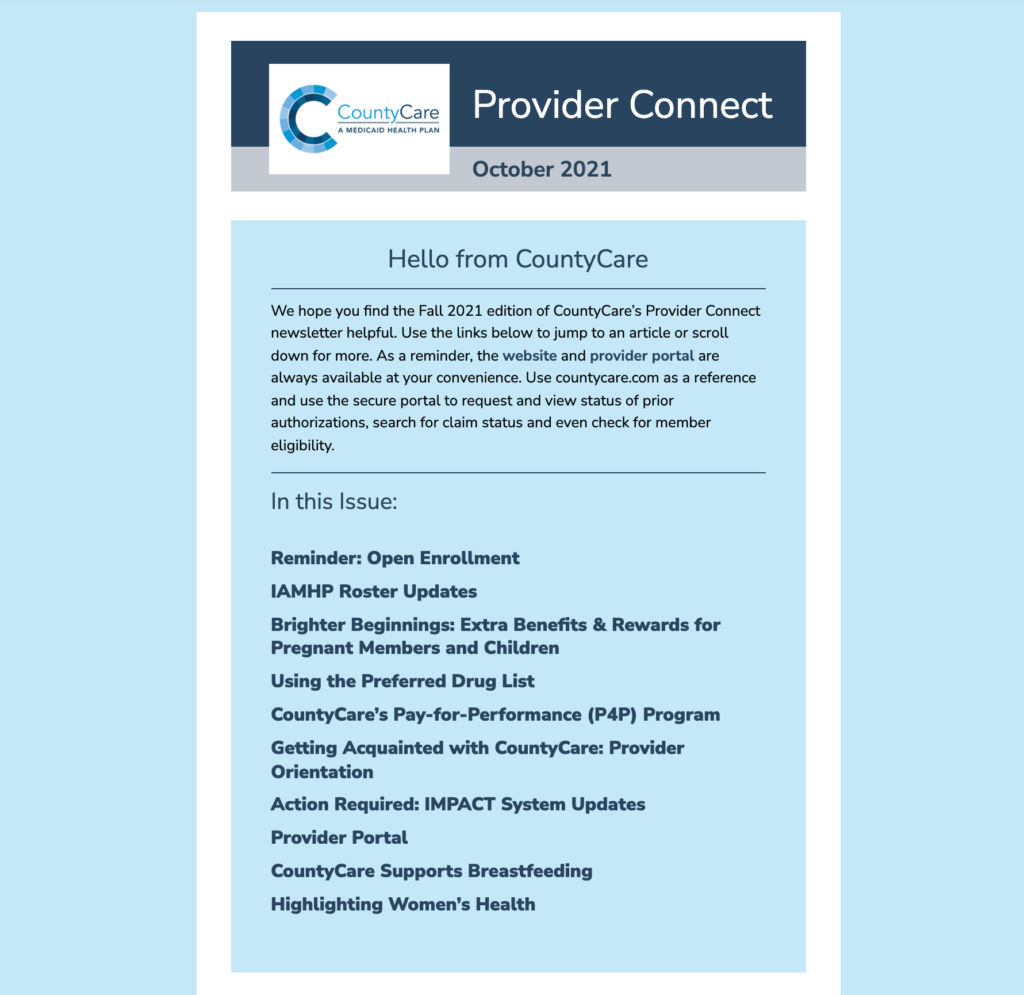 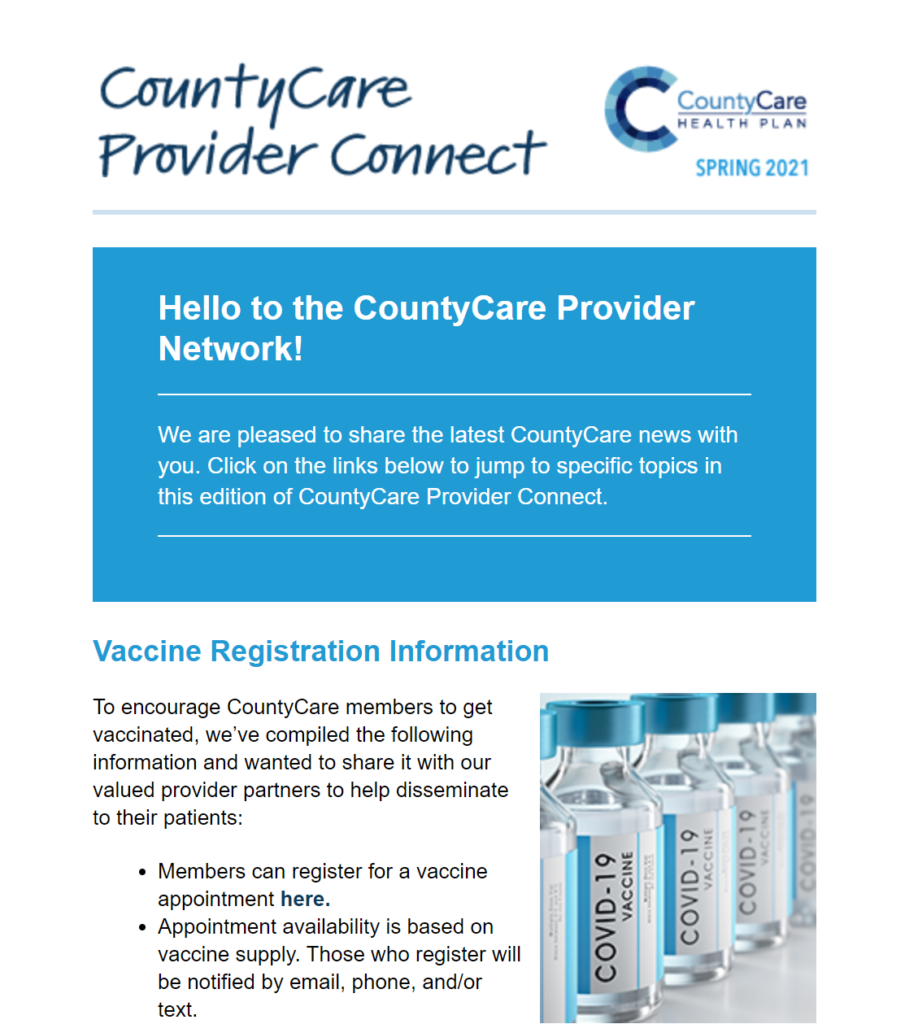 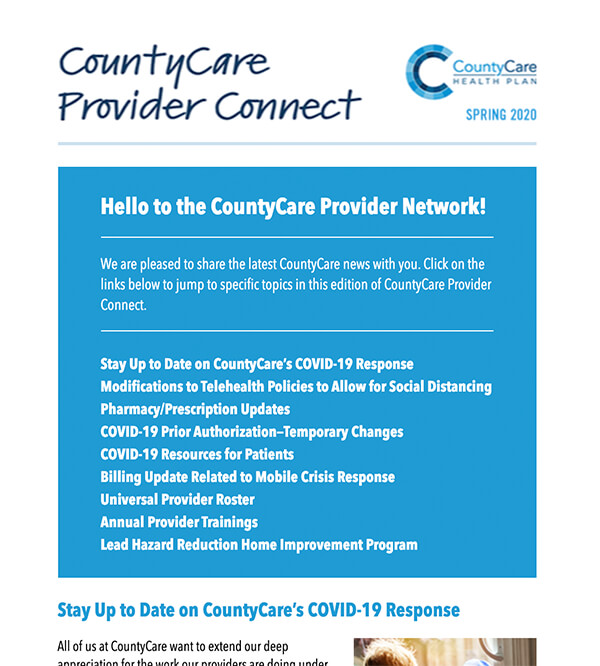 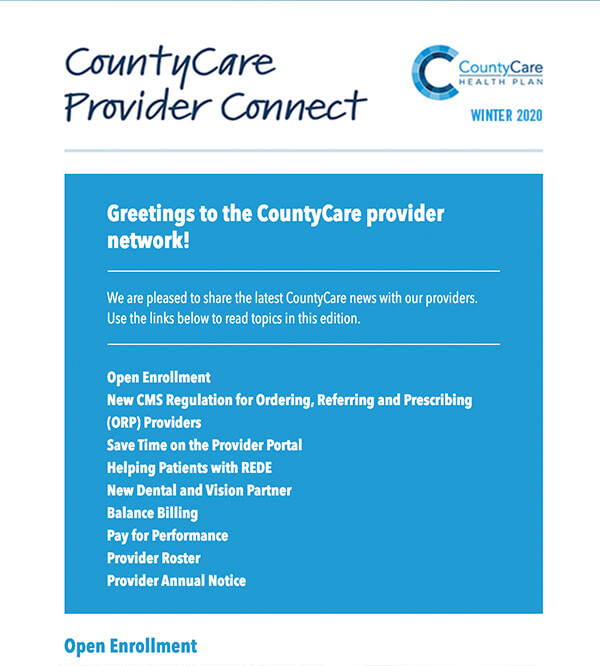 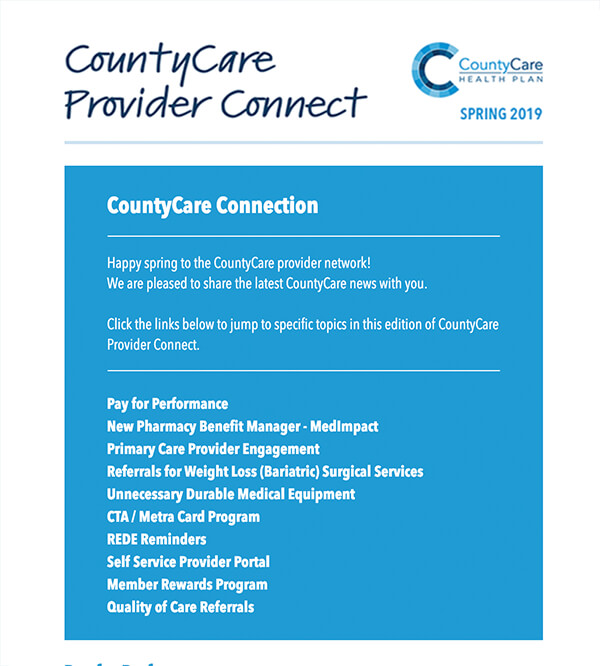 CountyCare is pleased to announce that Family Health Network (FHN) and Aetna Better Health Medicaid members have transitioned to CountyCare, creating the largest Medicaid plan in Cook County. CountyCare, FHN and Aetna have a long history of caring for the Medicaid population in Illinois. This exciting growth expands CountyCare’ss strong commitment to providing a strong network and the resources of a large health plan to serve the residents of Cook County.

Our goal is to maintain patient-care continuity through strong provider relationships.

What does this mean for you as a provider?

What does this mean for your patients who are transitioning to CountyCare?

Your partnership in the coming months will be greatly appreciated as we complete this complex transition. Please know that as always, our top priority is patient care. Should you have questions or concerns, please check our website or call Provider Relations at 312-864-8200.

Your role on the front line of patient care can have a substantial impact on reducing childhood obesity.

Childhood obesity is widely recognized as a preventable epidemic that has serious impact on both the current health and long-term health of our children and adolescents. The Weight Assessment and Counseling for Nutrition and Physical Activity for Children and Adolescents (WCC) HEDIS measure was designed to help address this issue and also ensures you are meeting all requirements to monitor child weight among your patients to be eligible for reimbursement.

The WCC measure calls for the most critical components of assessing risk for childhood obesity, including body mass index (BMI), counseling for physical activity and nutritional counseling. Accordingly, both HFS and CountyCare have made WCC a Priority Quality Measure. CountyCare has not yet achieved our target for this critical HEDIS measure and we need your assistance in improving performance. We know that talking to parents about weight issues in their children can sometimes be difficult or awkward, but children’s healthcare providers are in the best position to do this.

Links to Help You Guide Kids to Healthy Lifestyles

Consistently following WCC requirements ensures that you will be reimbursed for following WCC guidelines – and most important, offers a bright outlook for the health of your young patients.

In part one of this two-part series, we informed clinicians of the increased number of Sexually Transmitted Diseases (STDs) that are being seen in Illinois and nationwide. The Illinois Department of Public Health (IDPH) STD Section has finalized the 2016 STD surveillance data for chlamydia, gonorrhea and syphilis. For the third year in a row, Illinois has seen an increase in each of these three reportable STDs. In this series, we focus on chlamydia since chlamydia is the most common notifiable disease reported in the U.S. and chlamydia screening in females 16-24 years of age is a HEDIS measure (CHL).

Chlamydia screening measures target women since women are more severely and disproportionately impacted by chlamydia’s complications. The Centers for Disease Control and Prevention (CDC) recommends annual screening for chlamydia in all sexually active women under 25 years of age, whereas they recommend “considering” screening young heterosexual men only in high prevalence clinic settings or in populations with a high burden of infection, such as communities within Cook County.

For men who have sex with other men (MSM), the CDC recommends chlamydia/gonorrhea screening at least annually, which includes testing from all site(s) of sexual contact (urethra, rectum, pharynx) regardless of condom use. According to a 2011 study published in Sexually Transmitted Disease, 83.3% of chlamydial and gonococcal infections among asymptomatic MSM visiting an urban municipal sexually transmitted disease clinic would have been missed by urethral screening alone. More intensive screening is recommended for MSM since this groups is disproportionately impacted by many STDs, including, but not limited to, chlamydia, syphilis and antimicrobial resistant gonorrhea when compared to women and men who have sex with women (MSW). (1)

Pregnant and Preconception Women and STDs

STDs can complicate pregnancies and the ability to become pregnant. Congenital syphilis has been rising in the past few years and can cause congenital infection, low birthweight, prematurity and fetal/neonatal death. Left untreated, STDs such as chlamydia or gonorrhea can seriously damage a woman’s uterus or fallopian tubes causing pelvic inflammatory disease (PID), which may lead to chronic abdominal pain, ectopic pregnancies, and infertility. In addition, pregnant women with untreated chlamydia infection can suffer from miscarriage or pre-term delivery, and can pass the infection to their newborn during delivery, causing ophthalmia neonatorum (conjunctivitis) or pneumonia.

Thus, it is recommended for all pregnant women under 25 years of age to be screened for chlamydia at their first prenatal visit and again during the third trimester. For women ages 25 and older, testing is only recommended if the women are considered at increased risk. If a pregnant woman is found positive for chlamydia, it is imperative to provide treatment immediately and perform a test-of-cure 3-4 weeks after treatment. It is also recommended for the patient to be retested 3 months post-infection for possible re-infection. Additional STDs that pregnant women are either recommended or required by law to be tested for are gonorrhea, syphilis, and HIV.

Expedited Partner Therapy (EPT) allows healthcare providers to offer prescription drugs without prior medical evaluation or clinical assessment to the partner or partners of persons diagnosed with chlamydia or gonorrhea (in the last 60 days) who are unable or unlikely to seek care. EPT has been proven safe and effective; adverse reactions to recommended treatment regimens for chlamydia and gonorrhea are rare. In 2010, an EPT law was passed in Illinois protecting clinicians providing EPT from civil and professional liability, except for willful and wanton misconduct. Click here for the Illinois EPT Law.

Monetary Burden of STDs on Healthcare

In 2013, the CDC published two analyses that assessed the severe human and economic burden of the 8 major STDs among youth in the US. In these analyses, the CDC estimated an incidence of 20 million new infections and a prevalence of more than 110 million new and existing infections at a given time among men and women in the United States each year, costing the American healthcare system nearly $16 billion in direct medical costs (in 2010 dollars).

Prevention through screening, diagnosis and prompt treatment is needed in order to combat the ever-growing number of STDs nationwide. The CDC has outlined specific screening recommendations for many STDs that should be followed by all providers. Unfortunately, many, if not most, women are not receiving this cost-effective preventive health service (6). The table below presents the outcomes of chlamydia screening among reported female specimens tested in Illinois laboratories. Based on the following assumptions from recent studies, this data estimates the number of PID and infertility-related morbidity avoided by chlamydia screening and adequate treatment regimens, as well as an estimated yearly healthcare cost savings for averting PID-related interventions on those females testing positive that were screened and adequately treated.

The assumptions used for this data analysis include: the risk of PID is 30% among women with untreated or unsuccessfully treated acute infection, 20% of women who experience PID will become infertile and the average cost per case of PID being estimated at $1,955. A chlamydia treatment adequacy rate for all of Illinois is calculated at 78%, which was derived from data submitted in the 2015 Illinois National Electronic Disease Surveillance System (INEDSS).

CountyCare met the target for chlamydia screens for sexually active women ages 16-24 (see below) in the most recent HEDIS results, but screens in other age groups were lacking. While the screening rates improved in all categories, we did not meet our target rates in the other age categories.

You can get recognized and rewarded for improving chlamydia screening rates among your patients. CountyCare will honor the medical home with the highest screening rate in HY18 with our Public Health Provider Recognition Award. Details to follow.

Centers for Disease Control and Prevention (CDC), (October, 2016). STDs in Men Who Have Sex with Men https://www.cdc.gov/std/stats15/msm.htm

Congratulations to all the medical homes participating in the CountyCare network that recently received Health Center Quality Improvement Grant Awards by HRSA. A total of 44 awards representing $4,129,079 in grants were awarded to providers with marked improvement in quality, access to care, addressing health disparities and other key factors.

Click at bottom of this page to view the quality/reporting criteria used to award the grants.

The Illinois Chapter of the American Academy of Pediatrics (ICAAP) offers a wide range of events including free office- and hospital-based educational programs, educational webinars, seminars and conferences.

Event and registration details can be found at www.icaap.memberlodge.org/events. 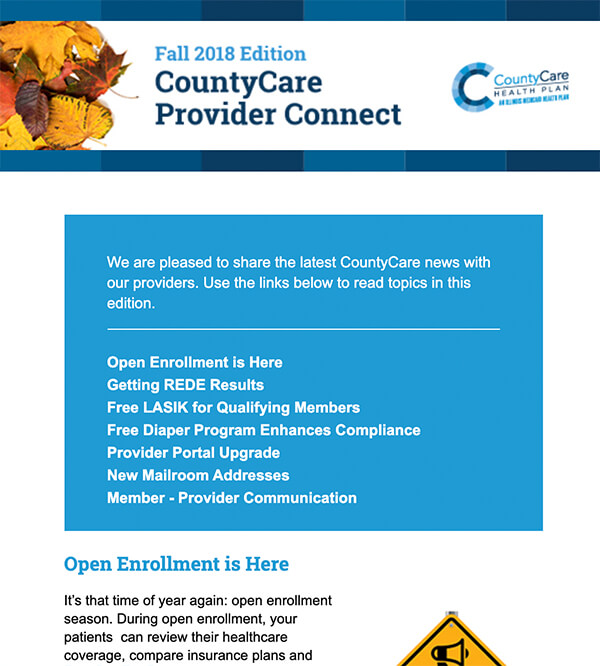 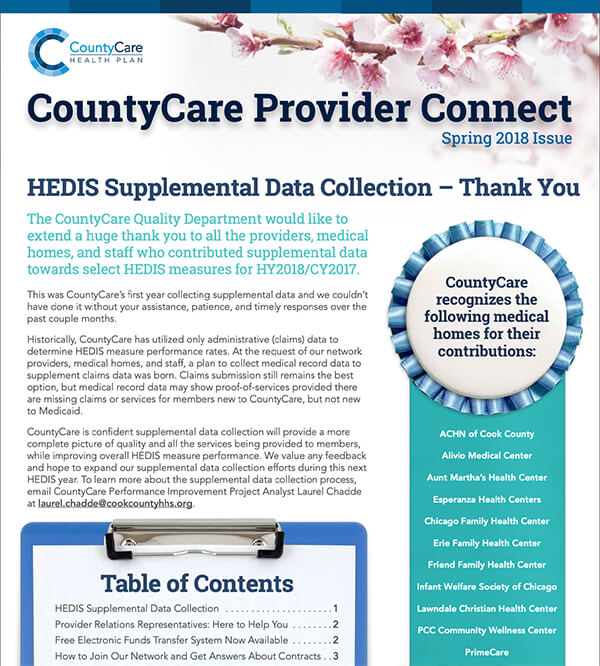 To receive your Medicaid renewal form, your address must be up to date with the State of Illinois.

From Symptoms to Solutions